Spaying and Neutering Cats and Dogs in Anjou

Sterilization, which is called neutering when referring to males and spaying when referring to females, is a surgical procedure performed under general anesthesia that prevents your pet from reproducing. More specifically, the uterus and the ovaries are removed in females, and the testes are removed in males by an incision at the base of the scrotum.

Starting at what age?

Clinique Vétérinaire Jarry can sterilize your kitten or puppy from the age of four months in males and four and a half months in females. We recommend that your pet be sterilized before puberty, which occurs around the age of six months, as the reproductive hormones can cause behavioural problems in males such as marking territory, and physical problems in females, such as mammary tumors.

However, if you adopt an adult animal or decide to spay or neuter your companion in later life, we will do blood tests to ensure that surgery is no risk for your older pet. It is never too late to sterilize your pet!

In addition to preventing surprise litters of puppies and kittens, sterilization has many advantages from a medical and behavioural point of view, especially if it is done before your pet reaches puberty.

In males, sterilization can reduce or avoid the following problems:

In females, sterilization is equally advantageous and can reduce or avoid numerous problems:

A lower risk of developing a tumor translates into a higher life expectancy for your pet. Similarly, less of a desire to run away or to defend its territory will reduce your pet’s risk of accidents, fights or picking up a contagious disease.

By sterilizing your pet, you might also be eligible for reduced costs on mandatory municipal animal permits. Visit the City of Montreal website to learn more.

After sterilization at Veterinary Clinic Jarry, your pet should avoid running, jumping and baths for 10 to 14 days. Watch the wound after surgery and call us if you notice any swelling, redness or pus, or if any stitches have come undone.

Some people believe that their dog will become less protective once it has been neutered, but it is a dog’s natural instinct to protect its family and its home. However, it is true that sterilization will avoid dangerous fights with other non-neutered males!

Other people believe that their dog will feel less "male", but masculinity is a human trait that we should avoid projecting onto dogs. A dog’s personality depends more on its genetics and environment than on its hormones!

Another popular myth is weight gain after sterilization. Sterilization is performed at puberty, and it is normal for an animal to become calmer as adulthood approaches. To counter any weight gain, simply feed the animal a lower calorie diet and give it more exercise.

Be Part of the Solution!

Every year, thousands of animals are abandoned in shelters in Quebec. Sterilizing your pet is acting responsibly by not contributing to the pet overpopulation problem. The birth of a puppy or a kitten is cute, but it's also one less adoption of an abandoned animal in a shelter.

Have you just adopted a pet and would like to have it spayed or neutered, or would you like to prevent or stop problems with your adult pet? Make an appointment for sterilization at our clinic in Anjou today. 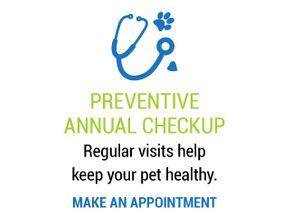